The trial over the assassination of Alexandros Grigoropoulos opened today in Amfissa, with the defense of the assassin cops trying to turn the trial on its head.

After a two days delay the trial of the assassins of Alexandros Grigoropoulos opened today in the remote town of Amfissa.

The procedure, which is still to be completed for the day, opened with the lawyer of the defense, the notorious Mr Kougias, trying to turn the trial on its head by presenting material supposedly indicating that before his assassination the dead boy has been at a water-polo match in Chalandri during which hooligan activities took place. The court has declared its reluctance to accept the material, while the lawyer of the boys family intervened to ask if this was a trial of alleged acts of hooliganism, or of the assassination of Alexandros

Tension rose again when the defense claimed that Mr Korkoneas, the main accused "did not kill anyone, it was a tragic coincidence. finding him self in danger he shot up in the air. The ones who really attacked were the boy and the witness. Those 16 year old boys are not normal kids like mine and yours". At that moment, police had to intervene to contain the enraged mother of the boy.

The courts are guarded by strong police forces at gunpoint, while clashes that appeared two days ago at the original, postponed, opening of the trial were not repeated.

On other news from greece, farmers continue their mobilisation which is taking qualitatively new characteristics after farmers from the blockades of north greece have declared they no longer consider their official unions relevant and have formed an ad hoc autonomous council comprising of two elected members from each blockade. This is an unprecedented move of autonomy by a productive sector plagued by all-powerfull party-controlled unions. The development has visibly angered the government, with the PM urging the farmers from the Parliament to abandon the blockades and engage in dialogue. The farmers insist they demand nothing less that what PASOK promised them before its landslide electorate victory last October. The herder's union has announced its mobilisation beginning next Monday for the re-enforcement of the farmers' blockades.

The developments on the farmers front, has caused the intervention of the ex-PM of the right and senior statesman Mr Mitsotakis who warned the government that "the country is in its worst overall crisis since the end of the civil war" warning that there could be a mass uprising in the near future.

On other fronts, Civil Aviation workers symbolically occupied the Civil Aviation Headquarters on Thursday, while prostitutes main Athens union formed a demo outside the parliament demanding more working positions and better health care.
Finally, the latest guerrilla attack, against the Ministry of Press, has been claimed through a long communique by a new group called "Revolutionary Organisation 6th of December" (referring to Grigoropoulos day of murder). The communique has caused publicly expressed deep concern to the authorities due to its completely new style of analysis, different and openly critical of both the leninism of the Revolutionary Struggle and the nihilism of the Sect of Revolutionaries (though none of the groups are named, the references are very explicit). The communique presents a concise history of the social and class movement since the collapse of the junta, and declares what it terms "social guerrilla" of ELA and 17N outdates, due to lack of mass working class movement. It rather attacks the concept of democracy and declares itself as "a third pole", an "experiment" which calls for the mobilisation of participants of the December Uprising beyond the given identities of traditional anarchist or revolutionary politics.

Update: The trial continued with the testimony of the boy's mother who described the last day of Alexandros and the conditions of his murder in Messologiou street: How the two cops shot at the boy and left him dying in the middle of the street, while they calmly walked back to their police car (as shown by the home-video shot at the time). In response to the pig Korkoneas' claim that he would never harm anyone, but would put his body as a shield against bullets threatening any citizen, the mother replied that "the life of my boy is worth for them as much as a cockroach. They left him there like a squashed mouse". Responding to the defense lawyer's claims that the boy was rioting, the mother replied that "They have killed my boy twice, the first time by the assassin, and the second time by trying to soil his honour. They killed his body and then they killed his soul". The trial will continue next Friday with the testimony of the doctor responsible for the necropsy. It must be noted that the bourgeois media are systematically under-reporting the trial, obviously at the orders of the Minister of Public Order, known for his draconian media manipulation in his last term 7 years ago. 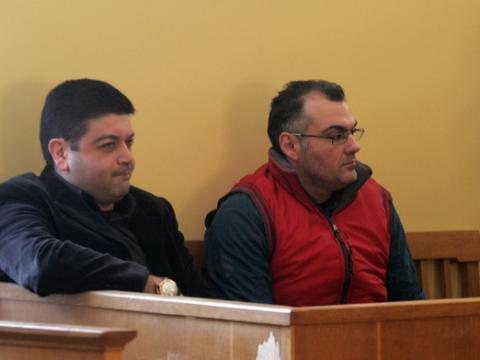 The police officer charged with the murder of Alexandros Grigoropoulos, which sparked heavy rioting across the country, has been found guilty.
Image