A brief account of the Stop 'The City' protests (1983/4 London) concentrating on attitudes to police repression.

When the idea to stop the City of London (one of the major financial decision-making areas of the world, and the real seat of power in this country) was proposed, nearly everyone said it can't be done', 'they'll never allow it' , 'you'll be smashed' etc. However, people involved with peace movement protests at military bases and elsewhere had a great deal of experience and confidence in organising independently and refusing to be intimidated. Hence they were the backbone of the first STC which was specifically opposed to war and arms manufacturers/financiers. No-one knew what would happen.

In the end, despite an early morning police raid on a co-ordination building, we held a strong, friendly, informative and disruptive protest in the heart of capitalism. To counter peoples' fear and fantasies of what the police 'might' do, we had encouraged each other to come in self-organised groups, with our own plans - assembling at three points, where maps, briefings, ideas, legal back-up, help to form groups etc were provided. Messengers spread Information.

Police were out-organised and taken by surprise… They expected leaders and sheep (there were none). The carnival and creative atmosphere also put them on the defensive, as well as the thousands of workers looking on.

By March 29th, the police had a semi-military control plan. However, they were still confused and the police Chief rang 15 contact phone numbers begging to talk to 'the organisers' and negotiate. No-one did). STC 2 was much broader (aiming to close down the 'City' on the last day of the financial year in opposition to all exploitation and oppression). All active social opposition movements were invited to take part in the way they wished… 3000 + participated—We created excellent briefings, back-up services (including our own first aid and legal support teams). The central streets were virtually under our control at times. Police were unable to use more than 'minimum force' in case full-scale resistance by protestors lead to our seizing control/building barricades, increasing our damage to financial property.

Demonstrators largely refused to attack police, partly through fear but also through the desire to preserve harmony among ourselves (many being pacifists). But there were hundreds of independent actions, as well as surges, spontaneously coordinated by those involved. Dozens of groups distributed up to 40,000 of their own leaflets to workers. Many responded fairly positively, and most [watched] fascinated....this again gave us strength. Because there were no leaders, [people] communicated and took initiatives themselves.450 arrests had failed to break [???] hour long demo. [After?] STC 2 , the 'City' courts were choc-a-block with# STC defendants. Some of them had given false names and done a runner. Others had good, coordinated defences (which had been helped by defendant's meetings organised after both STCs and publicised in the briefings handed out during the events) On some days there were collective protests inside and outside the court. We were fairly successfully making the court and police look silly.

Police changed their tactics. A poorly publicised and deliberately uncoordinated protest - STC 3 - May 31st 1984 - failed to attract the previous participants, let alone any new ones. Only 5-600 arrived, in dribs and drabs. Police responded by searching everyone, stealing all leaflets and useful equipment, and told people to fuck off out of the City or get nicked. This is what happened. 170 arrests. No back-up.. Almost no actions.
But Sept 27th had already been chosen for the next major day of protests (STC 4) and most people had Ignored the May one as ill-conceived and too rushed. But the police success may have scared off a lot of people who would have been expected to join In after the March STC.

At the same time, the media was busily caricaturing all the participants as 'punks' This was to help marginalise us, to create a psychological barrier between us and the workers, as well as between and the many hundreds of thousands of people active in a broad range of struggles (against racism, in the labour, peace and animal rights movements, in unemployed and tenants struggles etc...) . Many of those were beginning to be interested (especially the unemployed and the mineris), despite either lack of interest or outright opposition to the STC idea by most all Left-Wing and Alternative organisations and magazines.

Throughout the summer there was a great deal of work to publicise STC 4 and involve people. Monthly evaluation/preparation gatherings restarted. There was a new atmosphere amongst us regarding the police. Many people having experienced the repression/Courts had become angry and more determined to fight back next time. They felt that we could defend each other and attack the police If necessary. But others had dropped out, either due to fear or disapproval of confrontations. Also there was more discussion of techniques for avoiding the cops (small-group, mobile actions covering a wider area) and plans to disrupt their radios end vehicles. The character of a mass, diverse, open demonstration/street festival was gradually changing Into a day of independent small-group actions, coordinated yet separate (and some secret).

On Sept 27th, maybe 2000 came - mostly anarchists and unemployed, as well as some peace and animal rights campaigners. Police repression was well organised and strong. It was impossible to gather at the City centre (St Paul's and the Bank of England, used previously, were cordoned off). Individuals and isolated small groups who were 'looking for the demo' were threatened with arrest, and soon left, disillusioned. Anyone looking like a punk was particularly harassed. 470 were arrested and held hostage (only 35 were charged) to break up the collective strength.

However, many people who'd organised Into independent groups were able to do quick actions all over the place (graffiti, smashing bank windows, a quick occupation etc). 2 or 3 times 3-400 people came together for a march into the centre… Hundreds who were dressed up smart continued to float about (giving out leaflets, passing messages, doing actions...). But generally the City became a no-go area almost for us. Many demonstrators therefore decided to go to Oxford Street, and Soho in central London and were able to make quite a few effective protests at various banks, offices and stores etc.

Despite an impressive amount of successful and courageous actions in the face of repression, maybe a majority of participants were disheartened and some disillusioned. At the following evaluation meeting in Leeds it was generally felt that, although local town centre protests could (and did) continue, any future attempts to close down the heartland of British capitalism would need to involve tens of thousands of people.

The STC groups weren't strong enough to overcome their isolation - to explain themselves and draw in their neighbours, and other campaigning groups and individuals who may still think that parliament is where decisions are made, or that we can trust others to 'look after our interests' or improve the world for us. The image pushed by all the press that this series of protests were chaotic, obscure, ineffective and nasty, and only relevant to young punk anarchists gradually took hold. In fact, stopping 'the City' is a VITAL NECESSITY for everyone as capitalism is a vile, destructive and oppressive System which we ourselves have the power and the responsibility to change.

Further protest s against the 'City' may develop again out of new struggles (strikes, unemployed movements...). But for the moment those involved with STC have moved on to other forms and areas of opposition (such as local groups, Stop Business-As-Usual protest days, back to single-issue campaigns (groan!), conferences like this.)

SOME CONCLUSIONS ABOUT DEALING WITH REPRESSION

We must realise that each struggle, although we are all fighting the same System and its police, has its own character. A strike, a riot, a series of peace protests, a one-off demo, in the countryside or town centre or residential area etc - each is different. From our experience, in all protests, excepting a community uprising (as in Handsworth, St Paul is, Liverpool 8 etc) an enormous amount of preparation, organisation and discussion is vital. The idea is to create, at the grass roots, the greatest possible sharing of information, responsibility, decision-making, awareness, initiative, communication, confidence, mutual aid, independence etc. The miners’ strike, the peace movement, the struggles in Ireland and STC networks had/have some of these strengths.

Here are some suggestions from the STC experience

1) Beforehand
Don't fantasise about police strength (they are nearly always overrated). Don't be intimidated . Concentrate on getting the maximum number of people involved. Organise yourselves early. Encourage many local and practical groups for various tasks. Hold regular open meetings to coordinate. Don't have leaders or spokespeople. Survey the area. Print good maps, advice (legal and ideas for possible activity). Do good publicity. Inform/involve local residents and workers as far as possible.

2) During a protest
You are stronger in groups, self-sufficient in ideas, plans, initiative, provisions (food, first aid etc) , leaflets... Legal, first aid and co-ordination support networks may be vital. Maps should be distributed. Communication between all groups and areas needs to occur continuously (word-of-mouth, messengers on bikes etc). Spread accurate info to all.

We've always got more power than we think we have. We must try to keep the initiative and put the cops onto the defensive - keep them confused, uncertain, afraid, one step behind. Disrupting their vehicles, radios, command structure etc is useful. Keep mobile wherever possible, or stand your ground at a suitable place (refuse to be boxed in somewhere irrelevant where you can do nothing or get arrested). Leaflet and talk to all passers-by. Don't get into arguments - appeal to them to join you. Try to encourage people to do what they wish to do (never obey orders from stewards), yet build up collective decision-making also.

c) Afterwards.
Have already-publicised evaluation meetings. Also defendants' meetings and set up a bust fund to raise money for fines. Do reports. Publicise our strengths and successes (not go on about what the fucking police did). Print photos of us not the cops. Be willing to learn from your own strengths and weaknesses/mistakes. Be honest.

All change is a long process. Unfortunately most people tend to adapt and accept (most of the time) their roles. All of us have a lot to learn and must try to better help each other to be confident, to fight for our needs, to express ourselves. It's no good thinking we have all the answers or ordering others about. We can show by example what is possible.

We are sick of seeing articles and photos of cops beating people up. Let's see and read about our strengths. Also they always apologise for riots, sabotage etc.. ‘Thatcher/Unemployment/Cops are to blame etc’. We should rather advocate and applaud this sort of resistance, and encourage it to spread widely until the whole country(world) becomes a no-go area for our oppressors (cops, bosses, politicians).

Well , that's about it .Who knows what the future may bring, and whether we'll be successful in making a better world. We have to fight like hell from now on… 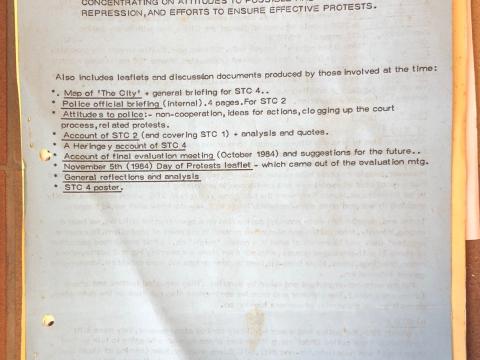 A brief account of the 'Stop The City' protests 1983/4, concentrating on attitudes to possible and…
Image 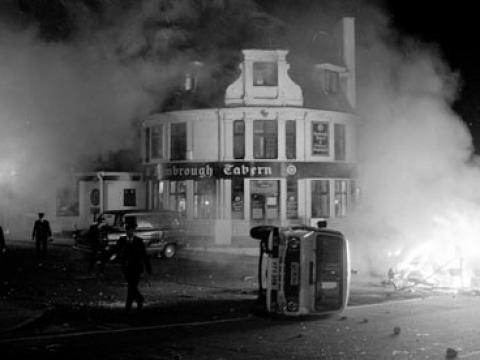 A series of articles by History is Made at Night on the 1981 July uprisings/ riots, which occurred in Brixton, Southall, Toxteth, Moss Side, Wood…
Image 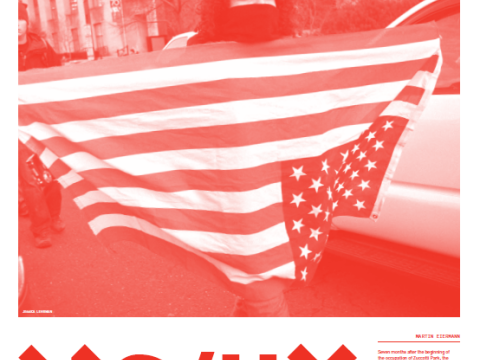 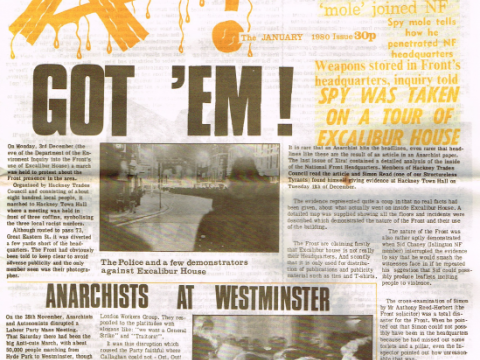