The Teamsters election: another lesson in corruption - Eric Chester

An article by Eric Chester about corruption and bureaucracy in the Teamsters. Originally appeared in the Industrial Worker #1607 (December 1997)

As we go to press, a U.S. monitor has just barred Teamsters president Ron Carey from standing for re-election, finding him personally responsible for illegally funneling union funds into his campaign. This article was written before the announcement:

The continuing saga of the Teamsters epitomizes the bankruptcy of business unionism. While the recent strike at UPS gained extravagant plaudits from the liberal press, the narrow reelection of Teamster president Ron Carey has begun to come unraveled. Not only has Carey's victory been voided, with a new election scheduled for mid-March, but the new "reform" AFL-CIO leadership is in danger of going down with Carey as the ramifications of a massive scam become clearer.

It would be all too easy to minimize the reports of corruption leaking out into the mainstream press. After all, with the White House selling access like the peddlers of fake Rolexes on the streets of New York, perhaps we should expect the same shady maneuvers from union bureaucrats. But this would denigrate the many years of organizing at the rank and file level, as Teamster truck drivers who had become fed up with mobsters and their pillaging of union pension funds sought to regain some control over their union. Unfortunately, the final result of the Teamster reform movement has been to chuck one set of parasites for another smoother and more sophisticated set of wheeler dealers.

In 1976, Teamsters for a Democratic Union emerged from the consolidation of three small opposition groups, with Ken Paff, a socialist activist, as coordinator. While the situation seemed bleak, a huge bureaucracy with its own goon squad, there were some bright sides as well. The leadership's idea of defeating a rank and file opposition never went beyond physical threats and red-baiting. Furthermore, the Teamsters were under intensive scrutiny for their blatant connections to the Mafia. In addition, the deregulation of the trucking industry, one of President Carter's gifts to the working class, had crippled Teamster power and put wages and working conditions into a free fall.

All of this came to a head in July 1989, when a federal judge placed the Teamsters under trusteeship. The court appointed an elections officer to supervise the next two elections. At this point TDU confronted a critical choice. It could have opted to nominate its own slate of candidates, thereby presenting the rank and file with a genuine choice. Instead TDU decided to back Ron Carey, a local union president and a business unionist with a reputation for honesty. With its opportunistic decision to go for the quick win TDU became the junior partner in a new Teamster leadership.

Carey won with 48 percent of the vote when the Old Guard split its potential vote by backing two different candidates. Over his five-year term in office, Carey has moved cautiously on almost every front. A UPS contract from 1992 was signed without a strike, and with very little gained. When Teamsters were forced into a bitter strike by the Detroit newspaper moguls, Carey and the Teamster board did little, leaving the strikers struggling to survive. The best thing that can be said for the new Teamsters is that it took organizing the unorganized as a serious priority, and yet even here it relied on friends in high places to overcome employer resistance.

The old regime had been an anomaly within the AFL-CIO when it came to playing practical politics. From 1972 through 1988, the Teamsters endorsed every Republican presidential candidate but one. Although Carey had been a nominal Republican prior to his election, the nucleus of his supporters and advisors were oriented toward the liberal wing of the Democratic Party. During the 1992 Democratic convention, Clinton and Carey met privately to discuss Teamster support. This close working relationship deepened after Clinton's victory. Indeed then Teamster political director William Hamilton wrote an internal memo informing the higher echelons of the hierarchy that "we ask for, and get, on almost a daily basis, help from the Clinton administration for one thing or another."

In the spring of 1996, after more than four years in office, the new Teamsters leadership was confronted with another election. This time the Old Guard united around James Hoffa, an obscure lawyer with virtually no track record, but one very important asset, his father's name. That spring, Carey's advisors were stunned to discover that Hoffa had a very real chance of winning. Carey had failed to deliver, and the rank and file knew it. Furthermore, Hoffa was garnering large contributions.

Confronted with a crisis, the Carey camp responded with yet another maneuver. Carey's campaign manager, Jere Nash, worked with Martin Davis, a political consultant who had been acting as liaison with the Democratic National Committee, to devise a plan to funnel large sums of money from the Teamsters treasury into the coffers of the Carey reelection campaign. To hide the true source of the funds, Nash and Davis decided to arrange a series of swaps, creating paper trails showing funds moving from the Teamsters to worthy causes. The money would then flow through a network of intermediaries before flowing back to the Carey campaign, or to one of the firms handling direct mailings or telephone blitzes aimed at the Teamsters membership.

Nash and Davis were eager to cooperate with other operatives skilled in the complex stratagems needed to hide large contributions that violate election laws, and they knew just where to look. In May 1996, Davis approached the Clinton campaign with his proposal. The Teamsters would give hundreds of thousands of dollars to Democratic state committees, and in return the Democrats would solicit friendly contributors to divert some of their donations to the Carey campaign.

High officials in the Democratic campaign structure have been quoted as saying that there was nothing wrong with them advising wealthy donors to aid a friendly union president, and yet the election rules governing the Teamsters election were quite strict. Federal law prohibits employers from contributing to union election campaigns. Needless to say, most big time contributors to the Democratic Party are employers.

As the Dec, 10 election date approached, Nash and Davis became more desperate as Carey's defeat seemed increasingly likely. They reached out to a whole array of progressive organizations, seeking to involve them in swap schemes. The AFL-CIO leadership joined in, with a significant portion of a huge contribution from the Teamsters to Citizens Action, a consumer advocacy group interested in electing a Democratic majority in Congress, passing through the office of Richard Trumka, secretary-treasurer of the AFL. In addition, Trumka and other high AFL-CIO leaders are reported to have provided bags of cash to Carey campaign aides. Union leaders have the power to hire and fire, and thus are categorized as employers under the federal law covering contributions to union campaigns.

As this whole sordid mess has unfolded, Carey has steadfastly maintained that he knew nothing. Indeed he has gone so far as to say that if there is "a victim, I certainly am the victim." So far three people, including Nash and Davis, have detailed their involvement to a federal grand jury. Nash and Davis have made it clear that Carey was a knowing participant. Carey's own personal secretary has said that Carey personally approved the $475,000 contribution to Citizens Action. Carey's denials have all of the credibility of the czar's protestations in olden days. The Little Father was so busy watching out for the interests of the poor and downtrodden that he was unable to keep track of the misdeeds of his advisors.

Ultimately, it would appear that the scheme moved more than a million dollars of Teamster funds to third parties, with most of this returning to the Carey campaign. By the end of the campaign, Carey had reported spending more than $3 million, with more than one million of this total listed as coming from anonymous sources. Hoffa raised about the same amount, with $1.8 million coming from unidentified donations.

The Hoffa camp engaged in its own efforts at unethical, and perhaps illegal, efforts to raise money. Bob Wages, the president of the Oil and Chemical Workers, has stated that he was approached by a Hoffa aide, with Hoffa present, and asked to get behind the winning candidate, or risk Teamsters members crossing Oil and Chemical picket lines. When Wages asked for more details, the aide urged him to solicit firms with union contracts for contributions to the Hoffa campaign.

The Teamsters election became a microcosm of the last presidential campaign. With Carey tied to the Clinton forces, and the Old Guard looking to the Republicans, the same corrupt practices were in full swing, as both sides searched for friendly corporate contributors. All of this would be depressing enough without the vocal presence of TDU. This supposed caucus of union militants has given Carey uncritical support throughout the entire debacle.

Battered by the election scandal, Carey supporters have extolled the recent UPS strike as a milestone, the first large step in the creation of a new and revitalized trade union movement. Certainly the 15-day strike marked a significant improvement over decades of quietly accepting one concession- filled contract after another. Nevertheless, the Teamster leadership was never prepared to shut UPS down for a lengthy strike. Instead, it relied on the Clinton White House to cajole UPS from hiring scabs for long enough to disrupt deliveries to the point where the corporation retreated from most of its demands for further givebacks.

The resulting contract was not a disaster, but it was also far from a major victory. For instance, current part-timers, 60 percent of the UPS workforce, received sizable pay increases. Yet with rapid turnover and a five-year contract, the true cost of the contract hinges on the starting wage rate for part-time workers. For 15 years, and this includes the last contract signed by Carey, this rate had been stuck at $8.00. The new contract raises this rate to $8.50. A fifty cent increase represents a total gain of 6 percent over five years. Thus, the real wage of a new part-time UPS worker, allowing for inflation, will continue to fall throughout the life of this contract. This hardly represents a momentous victory.

Neither Carey nor Hoffa deserves our support. We need a very different union movement than either of these bureaucrats will promote. We also need to build opposition caucuses that stand for more than an end to wholesale corruption and the direct election of union officers. As TDU so dramatically demonstrates, without a firm commitment to a radical program, reform caucuses can deteriorate into mere apologists for the more liberal wing of the union bureaucracy. We need to project a vision of a union movement that will mobilize across industries for militant actions that can win future confrontations such as the Detroit newspaper strike. We also need to say loudly and clearly that as long as unions continue to rely on their influence with political bosses working people will continue to see their living standards spiral downward.

An article about an attempted Teamster raid on an IWW campaign in New York. Originally appeared in the Industrial Worker (December 2005).

Article appearing in International Socialism, No.70, Mid-June 1974, by auto worker and socialist Fred Pilgotsky. In it he talks about wildcats in the auto industry, the conflicts between the unions and the rank-and-file, and the significance of race in the US. 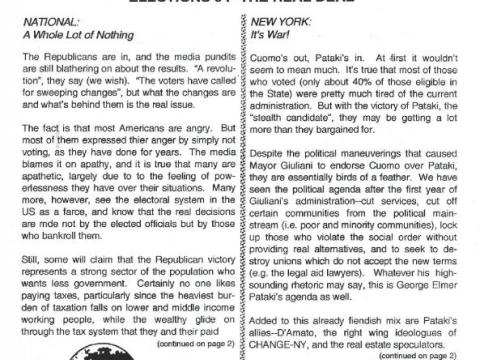 The No. 2 (December 1994-January 1995) issue of On the Line, a newsletter of Workers Solidarity Alliance in the New York/New Jersey area. 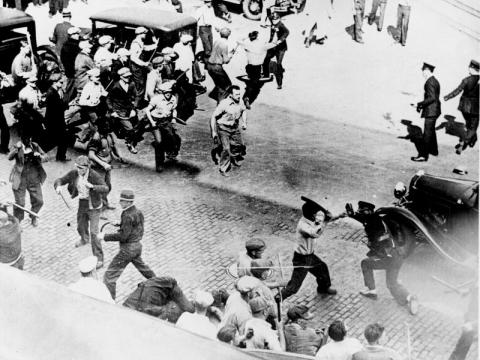