When the red flag flew in Munster

Farm labourers' strikes, occupations of creameries, red flags flying and 'soviets' being declared. Not usually the sort of thing associated with the years 1919-1923, the years of the War of Independence and the Civil War. These were most unsettling times for the establishment, so much so that even today they prefer these events to pass unremembered. Anarchists, on the other hand, are eager to see this history remembered because it reminds us of the spirit and potential power that lives within working class people.

Following the defeat of the 1916 rising, nationalism began to grow in support, much of it thanks to disgust for the death sentences carried out by the British authorities. Also growing was the trade union movement, for the first time since its epic battle with the employers of Dublin in the 1913 lockout. Over the next few years the ITGWU (now merged into SIPTU) saw its membership rise from 5,000 to 120,000.

The increasing opposition to the World War, combined with the Russian Revolution which had not yet been defeated by the Bolshevik dictatorship, generated a mood for change. And for many workers this was not just directed against the British government but against native exploiters as well.

In 1917 10,000 marched in Dublin to show their support for the new system in Russia. The Irish Citizen Army (pictured above) declared, with great foresight, that the lesson of Russia was that "the state must be destroyed and industrial control by workers established".

In 1918 up to 15,000 workers taking part in Limerick's May Day parade passed a resolution "that we, the workers of Limerick and district, in mass meeting assembled, extend fraternal greetings to the workers of all countries, paying particular tribute to our Russian comrades who have waged such a magnificent struggle for their social and political emancipation".

That year the British parliament voted to extend conscription to Ireland. The trade unions met this with a general strike on April 23rd. Everything stopped, apart from in the region around Belfast. The British government took fright and scrapped their plans to draft Irishmen into the trenches of France and Belgium. The victory gave confidence to workers and many wanted to push on with a fight against the bosses.

In 1919 40,000 Belfast engineering workers came out for a 44 hour week. Electricity was stopped, except for supplies to hospitals. Pickets of up to 2,000 strikers closed the shipyards. The 'Belfast Telegraph' was also stopped and the 'Workers Bulletin' of the strike committee became the most widely read paper in Belfast.

That year also saw the "Limerick Soviet". For the two years previous to this the local Trades Council had been publishing 'The Bottom Dog', a weekly working class paper which claimed to represent the interests of the"bottom dog"; those oppressed because of their class, sex or nationality. The ITGWU, which claimed 3,000 members in Limerick City, also recruited heavily in the countryside and a wave of farm labourers strikes swept the county.

It was in this context of trade union militancy and the republican war against British rule that a momentous event occurred. The incident that sparked it was the death of local IRA officer Robert Byrne, who was also a delegate to the Trades Council from the Irish Post Office Clerks Association.

Byrne had gone on hunger strike and an IRA rescue attempt had failed, leaving Byrne and an RIC man mortally injured. In retaliation for the policeman's death the British army occupied the City area and declared martial law. Everyone passing in or out of the city had show special military passes.

The Trades Council called a general strike in protest. For the next two weeks the Council ran the city. No shop opened without their permission. Food prices were regulated to stop profiteering. Only transport authorised by the Council was able to move through the city. Printing presses were taken over to explain their case and a daily bulletin was produced. The Council even issued its own money.

British soldiers were called on to desert their "imperialist capitalist government". It is said that a whole Scottish regiment was sent home for refusing to obey orders.

That winter also saw a national strike by lorry drivers against having to get permits from the British army. It was won with massive support from all over Ireland. All these events set the scene for what would become known as the "Munster Soviets"

The millionaire Cleeve family owned mills, bakeries, agricultural machinery works, the 'Limerick Chronicle' and 14 creameries throughout Munster. Their 3,000 staff had no union and earned one of the lowest wages in the country, 85p a week. In 1919 they joined the ITGWU and its affiliated clerical union. They formed a Council of Action and prepared to strike for higher wages.

Gains were won but Cleeves tried to split the union by offering different rises to each job. However, even when Knocklong creamery were left out on their own they still succeeded in wining a wage of £1.95 to £2.10 a week. This was secured after a campaign of spilling strike- breaking milk deliveries into ditches.

The following year the local union secretary, Sean O'Dwyer, who was a creamery worker, drew up plans to bring the company to its knees by occupying the creamery and its 12 subsidiary depots. Before taking over the workers arranged their own sales orders for the butter, with most success in Belfast. Workers at other creameries were visited and they agreed not to take milk from Cleeve's usual suppliers. This meant the farmers could be made an offer they couldn't refuse: to send their milk to the occupied creamery or throw it away.

On the second Saturday of May the strike began, and the following morning the strikers took over. A Red Flag was hoisted and the company's nameplate removed. In its place was put a sign Knocklong Soviet Creamery, and above this we make butter not profit. All the depots were occupied as well. The manager, Riordan, was ordered out and a new manager elected from among the ranks of the union members.

97% of the usual milk supply continued to arrive at the creamery. Two tons of butter were made each day and all orders filled, including those of Belfast. The workers were making a better job of running things than the bosses, and Cleeves freaked out. They contacted the union, where the workers gave them a list of demands including more pay, fewer hours, more holidays, the permanent removal of Riordan and no victimisation.

After just 11 hours Cleeves gave in and conceded all these terms. On being given back the creamery their very first act was to paint out the 'Soviet' sign... with green paint! But there is nothing like a win to inspire others. Cleeves workers in Limerick, Clonmel and Carrick-on-Suir also occupied their workplaces and turfed out the management, winning wage rises and better conditions. The least successful fight was in Tipperary where the women workers found it impossible to get supplies or markets. But even here they got half the pay rise they were looking for.

A wave of land occupations, mainly in Munster, then followed. The County Wexford Farmers Association warned of Red Flag Terrorist Agitators. In Waterdord some of the the big farmers organised their own 'White Guard' travelling around by car pistol-whipoping union activists and burning their houses in Dunhill, Holycross, Butlerstown and Ballduff.

Over 400 landlords were dispossessed by agricultural labourers (often ITGWU members). This went on until the IRA came to the aid of the gentry by having the republican land courts order an end to "illegal seizures".

This was not an isolated incident. The IRA was increasingly moving against workers' struggles. Among the better known examples are the smashing of a farm workers' strike at Bulgaden and the eviction of a 'Soviet' occupation from the mills at Quarterstown. Though they didn't always get their own way, one case was at Kilmacthomas when the IRA tried to keep the roads open while strikers were stopping the movement of scab labour and goods. A "labour flying column" arrived from Stradbally and forced the IRA to withdraw.

Countess Markievicz warned of the "imminence of social revolution". Her colleagues in the Dáil decided that "All this is a grave menace to the Republic. The mind of the people is being diverted from the struggle for freedom by a class war". The republican leadership had no problem declaring that their idea of freedom certainly did not include freedom from the boss.

Self-declared 'Soviet' occupations occurred at Cork Harbour, North Cork railways, the quarry and the fishing fleet at Castleconnell, the gasworks and a coachbuilders in Tipperary, a clothing factory in Dublin's York Street, sawmills in Ballinacourty and Killarney, the Drogheda Iron foundry, Waterford Gas, mines at Arigna and Ballinderry, two flour mills in Cork, Sir John Kean's farm in Cappoquin, the Monaghan asylum. Undoubtably there were others.

Most were successful as ways of forcing the bosses to pay wage claims, but they were about a lot more than just pay rises. They reflected the growing confidence of newly unionised workers and a political idealism that looked to an Ireland free not only of the British army but also free of native bosses. They called their occupations soviets because they were impressed by the example of the Russian workers who had established their own elected councils, called soviets, to run that country.

It could have led to great change in Ireland but instead the movement petered out. When the Irish Women Workers Union (now a part of SIPTU) called on the union leaders to get behind the occupations and extend them all over the country, not one of them paid any head. Even those who were not outrightly opposed were neither enthusiastic nor supportive. Like today's union officials they preferred to got through the proper channels rather than challenge the bosses' authority.

The writer Kostick of a book about these events says "a great tragedy of those years is that a perspective which could have challenged the hegemony of nationalism and unionism, that of fighting for a workers republic, had virtually no organisational form". His solution would have been a vanguard party of the Bolshevik type (he is a member of the Socialist Workers Party), suffice to say that history has given its judgement on that model.

But he was right. Very noticeable, by its abscence, was an organisation (or organisations) capable of making the case for a revolutionary change in Ireland and able to build links between the various isolated groups of workers in struggle.

The great value of Kostick's book is that it brings together a wealth of information about the hidden history of ordinary people in Ireland fighting to dump the bosses off their backs. The struggles our grandparents and great grandparents engaged in are inspiring. They certainly disprove the myth that the Irish working class are somehow naturally inclined towards caution and conservatism.

Written by Alan MacSimóin of the Workers Solidarity Movement 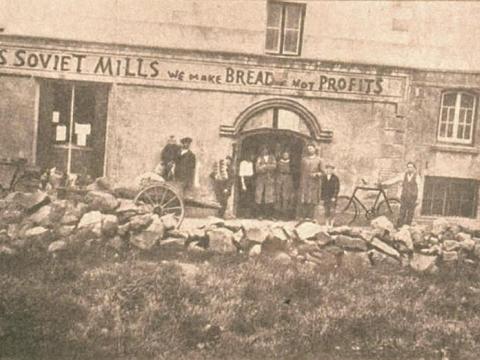 The story of the Limerick soviet and general strike, April 1919 by D.R. O'Connor Lysaght, written in… 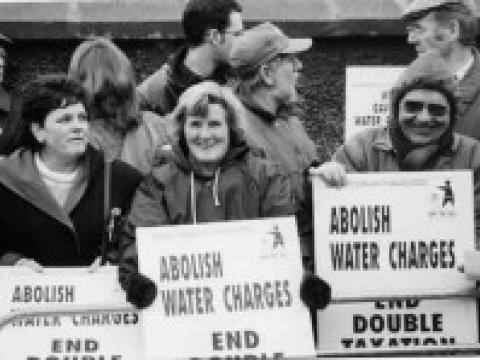 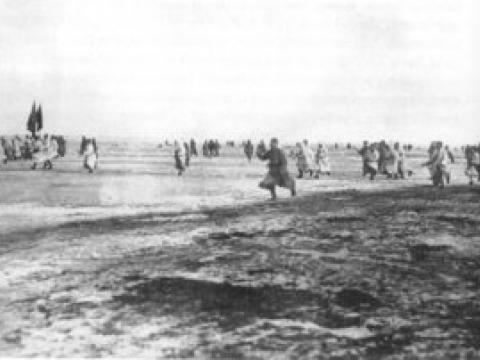