An article with information about resistance to eviction and workers' struggles over housing in Chatsworth, South Africa in the late 90s and early 00s.

"You throw the people out, we put them back in. You cut the water off, we put it back on”
– Western Cape Anti-Eviction slogan

“In May 1995, the city council’s new housing director and former [community] activist called for an increase in rentals in the Greater Chatsworth area…. It took the City Council two years of democracy before they called upon the chief constable, once again, to fetch the police dogs from the kennels and reach for the tear-gas canisters in the Old Fort Road armoury. In May 1996, a detachment of 50 security personnel rolled into Unit 3 in Chatsworth in four-wheel-drive pickups and began disconnecting water and electricity, throwing furniture and other belongings onto the street, before sealing doors of flats that were suddenly empty. It is impossible to chronicle how disillusionment turned into dismay and finally antagonism.”

In 1998 one particular round of evictions in Chatsworth ended in one death and several injuries. There was a spontaneous protest of 2,000 people at Durban City Hall but “no organisation to absorb and direct the militancy. Many people were so terrified that they went without food to keep up with payments.”

But then the community started to take the offensive – for example, going to politicians’ houses, and speaking to local gangsters to tell them not to trouble the vulnerable people in the area.1 The community in Chatsworth celebrated Diwali, the annual Hindu festival of lights, by holding a Festival of (No) Lights, casting the local City Council as a satanic villain pushing them into darkness.2

They also took Durban Council to court, claiming that the evictions went against the human rights to shelter and water. The council then tried to get the people to buy the houses (after paying their full rent arrears). A council administration entourage arrived in Chatsworth, to ‘sell’ the houses. “After the protesters had spent two hours encircling the room, the process was forced to stop. It had become clear to the officials that there were no takers for that deal.” When one of the officials accused the group of being ‘privileged Indians’, an elderly woman screamed back, “We are not Indians, we are the poors”. Within minutes this could be also heard as ‘we are not Africans, we are the poors”.3 The council then tried to relocate those who couldn’t pay to toilet-sized buildings even further out of town.4

Desai records three evictions that were to take place in Chatsworth in February 2000. The first was of Mr Biswanath, an epileptic man who lived with his niece and carer, Vanessa, her husband and their children. Vanessa and her husband sell cosmetics and make R500 a month. The police arrived at the eviction with ten vehicles and two platoons of armed men. Firing tear-gas, they entered the premises and threw possessions onto the street. Mr Biswanath suffered a seizure.

The next person on the list was Mr Mhlongo, an African single father of four children and a self-employed mechanic. Over 150 people, mostly Indian women, blockaded the stairs to Mr Mhlongo’s flat. They asked the police to wait for half an hour while they attempted to gain a postponement from the courts. The police did not wait. They fired live ammunition and tear gas at those preventing the eviction. The onlookers were so angry that they all joined in. “The ferocity and dedication of the community forced the security forces to call for further backup in order to retreat from the area, without effecting the eviction.”

The third family on the eviction list was squatting a flat after having lived for two years in a shed without water or electricity, and with snakes nesting in the floor. They had been on the council housing list for nine years. The community and media presence was so strong that the authorities did not attempt the eviction. Many people turned up for the eviction court cases. When they were adjourned, they went to the deputy mayor’s house. As he was not at home, they occupied the rent offices. At the next court date, the magistrates didn’t show up – but 2,000 protestors from the nearby African township, Bottlebrush, did. When the cases finally did go to court, the evictions notices were withdrawn.

Desai also records the struggles in Tafelsig and Cape Town and notices, “In the context of the relentless poverty in Tafelsig, the role women play in building structures of communal responsibility has become a vital part of day-to-day existence. The meetings that launched the campaign were mostly comprised of women, and in the crowds that confront the sheriffs and police, women are always prominent.” Linking struggles in the Cape Town area, the multi-racial Western Cape Anti-Eviction Campaign was born. “Much like the organisations in Chatsworth, it has become amoeba-like. When there’s a need for action it expands and increases in density. In between it shrinks, concerning itself mainly with resolving community disputes and providing a kind of social worker service.”

“The initiative of poor communities in self-organising, re-housing evicted families, and re-connecting disconnected water supplies (often using inventive local technology), and the courage of campaigners to fight the police in the streets, has meant that to enforce the war on the poor in Cape Town is no simple thing…. By and large the actions of the council grind to a halt.” 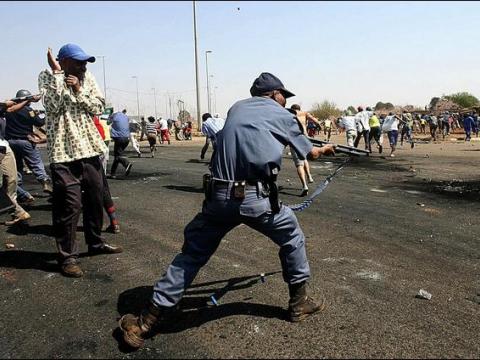 The shack dwellers of Civic Road near Parkwood, Cape Town, are angered that youth from the shacks are being subjected to repeated police harassment and arrests by the Grassy Park SAPS.